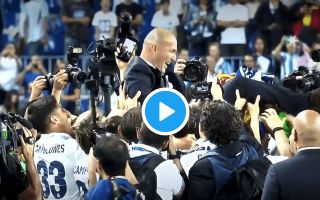 After Zinedine Zidane officially announced that he was stepping down as Real Madrid boss on Thursday, the club have bid farewell with a brilliant video montage.

The French icon only took the job in January 2016, and what has followed has simply been breathtaking in terms of the success enjoyed by the Spanish giants.

Zidane won three consecutive Champions League trophies, a La Liga title, two European Super Cups, two Club World Cups and a Spanish Super Cup to establish himself as one of the most successful Real Madrid coaches of all time.

Seemingly able to build a tight unit in the dressing room and to get the best out of his key figures, having established himself as a legend on the pitch, Zidane has left a legacy behind with his work on the sidelines now too.

Time will tell who is tasked with replacing him and continuing his incredible level of success, but for now, Madrid are rightfully paying tribute to ‘Zizou’ as although they faltered in the league this past season, their historic feat in Europe will live long in the memory for the club’s supporters.