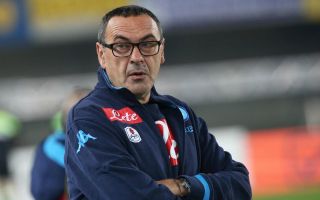 After weeks of speculation linking Maurizio Sarri with Chelsea, the latest suggestions are that the Italian tactician will not arrive at Stamford Bridge this summer.

Napoli have already moved to replace the 59-year-old, as they appointed Carlo Ancelotti last month in their bid to continue to progress and win major honours.

Sarri was responsible for developing an entertaining style of play at the San Paolo, with Napoli receiving praise in Italy and beyond for their sharp attacking play and high pressing game.

However, it wasn’t enough to wrestle the Serie A crown away from Juventus, and so a change has been made on the bench with Ancelotti now tasked with taking them to the next level.

Speculation has remained rife over Sarri’s future though, but Sky Sports now claim that he will not be replacing Antonio Conte at Chelsea due to controversial incidents in his past.

That doesn’t appear to make a great deal of sense at this stage, as those issues are nothing new and it would be fairly assumed that the Chelsea hierarchy were aware of his previous issues a long time ago.

In turn, as noted by The Telegraph’s Matt Law in his tweet below, he believes that the decision not to appoint Sarri will come down to financial matters rather than anything to do with the character of the coach.

Chelsea knew about Sarri’s past when they first considered him. If they don’t end up appointing him it will have nothing to do with his previous history and everything to do with money. If his lawyers can make him a free agent let’s see what happens. If not..

Sarri did have an €8m release clause in his contract with Napoli, but that has now expired as it only ran until June, as explained by Football Italia.

In turn, it remains to be seen whether or not that affects his chances of landing the Chelsea job, albeit Conte is officially still the manager at Stamford Bridge and no official word has come from the club as to whether or not they are definitely making a change this summer.

Time will tell if Sarri’s prospects change, but regardless of the reason, it doesn’t sound as though he’s a front runner for the position if the Blues are to replace Conte with financial concerns seemingly rife at the club currently with BBC Sport noting that they have put their stadium plans on hold too amid VISA issues for owner Roman Abramovich.