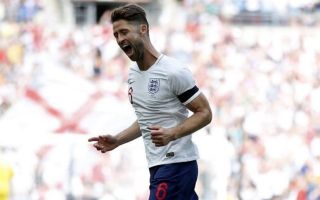 England started their warm-up for this summer’s World Cup with a narrow 2-1 win over Nigeria at Wembley Stadium.

While a win is welcome at this stage, Gareth Southgate may have one or two concerns about the way his players seemed to take their foot off the gas in the second half.

First-half goals from Gary Cahill and Harry Kane capped a dominant display from the home side, but they were far less convincing in the second period as Alex Iwobi immediately halved the deficit with a fine finish.

Here’s our round-up of the good, the bad, and the weird from England’s win over Nigeria…

It was good to see Gary Cahill on the score-sheet after the difficult season he’s had in a Chelsea shirt, and he showed just how important he can be for England with a generally strong display.

Even better, however, was this little exchange in the commentary that it provoked…

Glenn Hoddle: "I’ve seen Cahill score so many goals like that from set pieces. He's a real danger."

Iwobi’s goal was also a pretty neat finish, even if the England defending was pretty dire, but anything that winds up Arsenal fans has to be a positive.

Considering the attention he’s been getting (unfair, in our opinion), Raheem Sterling could’ve done without being booked for diving in a friendly.

Predictably, everyone was making the same joke as the tabloids surely sharpen their knives…

THE SUN ::: Sterling went down like he’d been shot ?

Sterling went down like he had been shot … #ENGNGA

Sterling went down like he had been shot with a tattoo.

The year is 2018 and Ashley Young at left-back for both Manchester United and England is very much a thing. It’s hard to get your head around it, but you’d better do so quickly because the World Cup is two weeks away and it’s happening.

Not only that, he’s one of the first-choice free-kick takers along with Kieran Trippier. Seems like just a few years ago we’d have David Beckham, Steven Gerrard, Frank Lampard and Wayne Rooney all fighting over those set-plays.

At least supporting England is always a laugh…until the inevitable heartache, that is.