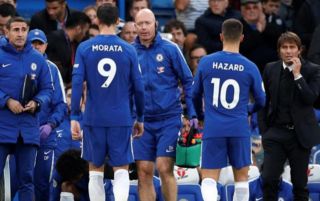 Chelsea boss Antonio Conte is reportedly interested in securing a move to Real Madrid from the Blues in the summer to replace Frenchman Zinedine Zidane at the Santiago Bernabeu.

Don Balon are stating that Los Blancos want Spurs boss Mauricio Pochettino to replace Zidane and that this won’t be happening due to the north London club’s reluctancy to see the Argentine leave.

The news outlet are also reporting that the Italian is keen on securing a switch to the Bernabeu, and that his representatives have began talks with Florentino Perez about a possible move for the Italian.

During his first season in England, Antonio Conte proved himself to be one of the best and most tactically astute managers in the Premier League.

The Italian’s choice to use the 3-4-3 formation proved to be a genius move, as it helped the Blues win their fifth Premier League title, as well as breaking a number of records along the way.

However, in his second season in charge at Stamford Bridge, things didn’t go to plan for the Italian, as he saw his Chelsea side finish fifth in the league and crash out of the Champions League in the last 16.

If Conte does end up in charge of Madrid, it’ll be hugely interesting to see how the Italian adapts himself to the Spanish league, and if he can topple the dominance on the league that Barcelona have exerted this last decade.