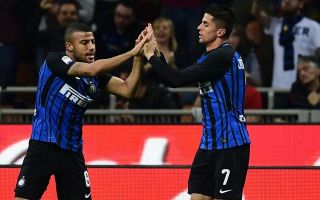 After boasting the best defence and attack in the Premier League last season, it’s difficult to pick out an area in which champions Man City could strengthen this summer.

Man City scored a whopping 106 goals in just 38 league games, while impressively they only conceded 27 in that same time period to show strength at both ends of the pitch.

While they did fall short in the FA Cup and Champions League, that would suggest that Pep Guardiola may need to tinker slightly this summer to improve them further to compete on various fronts, but it wouldn’t seem as though the defence is one of the priorities.

Especially with Yaya Toure leaving and Fernandinho turning 34 next season, it could be argued that the midfield should be the first place for reinforcements.

Nevertheless, according to The Sun, Man City are eyeing a swoop for Valencia right-back Joao Cancelo, with a £39m bid said to have already been made for the Portuguese international.

The 24-year-old impressed this past season after joining Inter on loan, as he made 28 appearances in all competitions and emerged as an important figure as the Nerazzurri secured qualification for the Champions League. In turn, it’s questionable as to whether they’ll be left disappointed if they harbour hopes of signing him on a permanent deal as they risk missing out to Man City it seems.

Capable of offering defensive solidity with an attacking threat and a tireless work ethic to constantly go up and down the flank, Cancelo could certainly fit in well under Guardiola, albeit he did miss out on the Portugal squad for the World Cup this summer.

That hasn’t seemingly put Guardiola and Man City off though, as they could look to make their move this summer and add Cancelo to offer competition and quality depth in the right-back slot next to Kyle Walker who was an almost ever-present last season and so arguably needs to have capable cover.