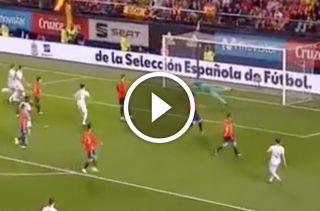 After producing one stellar performance after another for Man Utd this past season, goalkeeper David de Gea won’t be too pleased with his latest outing for Spain on Sunday night.

With the World Cup fast approaching, the Spaniards were in action against Switzerland as part of their preparations for the tournament in Russia.

After Alvaro Odriozola had given them the lead just before the half-hour mark, it appeared as though La Roja were on course for a win to boost morale, but De Gea produced an uncharacteristic mistake to allow Ricardo Rodriguez to tap in an equaliser in the second half.

The Man Utd shot-stopper couldn’t hold onto a tame effort from Stephan Lichtsteiner, as he allowed the ball to squeeze through his hands and into the path of Rodriguez who duly dispatched the ball into the back of the net.

While it’s never a good time for a goalkeeper to make an error, De Gea will certainly be hoping that he’s got his out of the way ahead of Spain’s World Cup opener against Portugal on June 15 and that he can rediscover his best form which has further strengthened the argument that he’s one of the best goalkeepers in Europe.

Julen Lopetegui will see his side face Tunisia in one last friendly test, and he’ll certainly be hoping for better from his more senior and experienced players.

De Gea with a howler as Rodriguez equalises for Switzerland #SpainvSwitzerland pic.twitter.com/z7CBlef4aQ