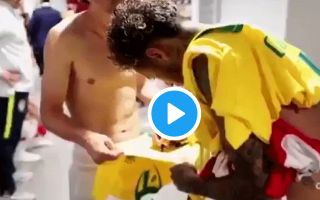 The Selecao ran out 2-0 winners at Anfield as both nations prepare for the World Cup to get underway later this month, but an exchange after the game has created headlines.

SEE MORE: Real Madrid could be rivalled by Chelsea and Liverpool in race to secure €50M Brazilian ace

As noted by Calciomercato, Real Madrid have been linked with a stunning swoop for Neymar, and so it remains to be seen if they can prise him back to Spain after his previous stint with Barcelona, just a year after joining PSG.

With that in mind, Modric decided to drop a cheeky comment to the Brazilian international on Sunday, as seen in the video below, with Sport translating it as: “We’re waiting for you, eh!”

Whether it was merely an innocent joke between the pair or the midfield maestro knows something that we don’t, time will tell what Neymar’s club future holds as his primary focus now will be on preparing for the World Cup and guiding his country to success in Russia.

Having returned from injury to feature at Anfield in the second half, it would have been a major boost for all concerned, especially given he got himself on the scoresheet with a well-taken solo goal. However, Modric has seemingly got everyone talking…

Luka Modric to Neymar behind the scenes: “Te esperamos, ¿eh? (we’re waiting for you, eh?” pic.twitter.com/mV48T3jeG3