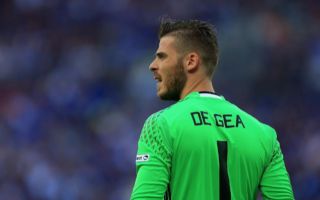 David de Gea has provided a timely boost to Manchester Utd by insisting he is happy with the Red Devils, according to Goal.

The star keeper is currently on international duty with former World Cup champions Spain and has been linked with a return to his homeland with reports suggesting Real Madrid are vying for his signature – as per the Manchester Evening News.

However, when questioned about his future De Gea said that he was calm and focused on the national side, but crucially said he was content with Jose Mourinho’s side.

“Usually I’m always calm, the important thing now is to start the World Cup on June 15,” De Gea said ahead of Spain’s 1-1 friendly draw with Switzerland, as reported by Goal.

“Is the most important thing. Do well in Russia, have a good role and do things in the best possible way.

“Future? I’m happy where I am, happy. Now, very focused on the national team.”

Since his arrival in England, De Gea has established himself as one of the world’s finest ‘keepers.

The Spaniard was in superb form for the Red Devils last season and was awarded the Premier League’s Golden Glove award for the first time in his career after keeping a clean sheet against West Ham in the Red Devils’ penultimate game to record 18 clean sheets – beating his previous best of 15.

De Gea’s stature has grown at Old Trafford and it is no wonder why he has previously been linked with a move to Real Madrid, as reported by the Metro.