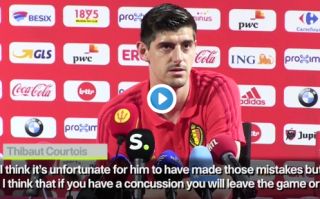 Chelsea goalkeeper Thibaut Courtois has appeared to aim something of a dig at Liverpool’s Loris Karius over making excuses for his Champions League final mistakes.

The German notably made two awful errors against Real Madrid as Liverpool lost the final 3-1 in Kiev at the end of last month.

Courtois cannot see the need to try to explain it away with talk of having suffered concussion, as has been reported by BBC Sport and others.

In the video below, the Belgium international appeared puzzled as to why Karius might be trying to dodge responsibility, in what could be taken as a bit of a dig at his fellow ‘keeper…