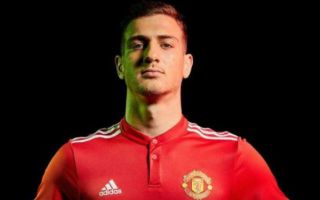 Manchester United have announced their second signing of the summer with young full-back Diogo Dalot signing from Porto.

The 19-year-old is one of Portugal’s brightest prospects who could be earmarked as a long-term replacement for Antonio Valencia.

Jose Mourinho heralded his new signing and called him one of the best full-backs in Europe of his age group.

“Diogo is an extremely talented young defender with all the qualities to quickly become a great player for this club,” Mourinho told United’s official site.

“He has all the attributes that a full-back needs: physicality, tactical intelligence and technical quality, combined with a Porto Academy mentality which prepares players for the maturity they need at the professional level.

“In his age group, he is the best full-back in Europe and we all believe he has a bright future ahead of him at Manchester United.”

But what do we know of the talented star and what attributes could he bring to Old Trafford?

Who is Diogo Dalot?

It’s a been a rapid rise for Portuguese youngster Dalot.

According to The Mirror, he made seven first team appearances this season for Porto and is now a Portuguese Under-21 international where he has played four times.

He enjoyed great success for Portugal at youth level where he starred in Portugal U17’s victory at the European Championship in 2016.

He has all the hallmarks to become a successful modern day full-back as he is quick, agile and comfortable in possession.

It’s no surprise that Mourinho has turned to his former club Porto to sign the youngster and Dalot also possesses a physical side to his game too – which a staple of a Mourinho player.

What also made him an attractive signing for the United manager is his versatility.

As per Sky Sports, the youngster is adept at playing on either flank for Porto B – which could see him provide cover for Ashley Young too.

This signing of Dalot follows the signing of Brazilian midfielder Fred from Shakhtar Donetsk which is seeing the Red Devils making a statement of intent as they bid to close the gap on rivals Manchester City next season.