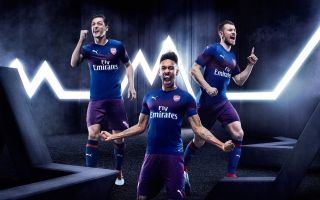 Arsenal fans are pretty happy today – even though their new away kit isn’t exactly the best effort Puma have come up with in recent times.

The Gunners launch two of their three kits today, and some promotional images have already come up ahead of the official event, with players pictured in the new strips.

Most notably, Aaron Ramsey is one of the big names modelling the away kit, which Arsenal fans have taken to mean is good news regarding his contract situation.

The Wales international is heading into the final year of his current deal, and the Times have reported he’s set to hold talks over extending his stay after being identified as a potentially key player under new manager Unai Emery.

While Ramsey appearing in a kit launch obviously doesn’t guarantee anything, it could be a sign that the club have chosen him as they’re confident he’ll actually be wearing the thing in the season ahead.

If there weren’t at least some optimism, it would be a strange choice, and that’s one of the things dominating Arsenal Twitter this morning ahead of the kit launch…

Ramsey in Arsenal's second kit launch. Does it mean he is staying ?? pic.twitter.com/cXsRF8bn0A

Implies that Ramsey is staying? ?????

Nice kit, and looks like Ramsey must have signed that contract!

Ramsey is 100% signing a new contract