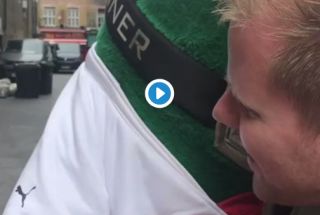 Arsenal fans are known for their rivalry with Tottenham, but how does the club mascot feel about the Gunners’ north London neighbours?

The answer is – not much, apparently. As the video below shows, the Arsenal mascot Gunnersaurus gave an honest but professional opinion of Spurs when asked on camera.

The dinosaur was also seen modelling Arsenal’s new kit, but we imagine he’s not allowed to give the same response on that particular issue today…