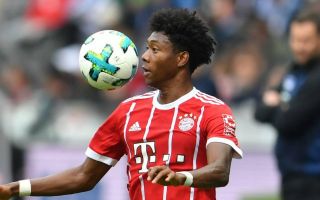 Real Madrid have been dealt a blow in their reported pursuit of Bayern Munich star David Alaba, according to Goal.

Alaba, 25, has been a superb performer for Bayern throughout his career, playing in a variety of different positions to good effect such as left-back, centre-back and in defensive midfield – most notably when Pep Guardiola was in charge.

He has won seven Bundesliga titles since he appeared in the team in 2010 and has helped the Bavarian outfit to win a record six consecutive titles this season.

His performances have attracted interest from a number of the world’s best clubs and as per Goal, Real Madrid were said to be interested in him.

However he has quashed speculation by pledging his future to Bayern for the foreseeable future.

“I’m staying at Bayern,” he told Bild. “I have a contract until 2021. I’m feeling very well in Munich, there’s nothing more to say about it.”

The left-back has been a first-team regular for Bayern since the age of 19 and Guardiola even told reporters in 2016 that he could become one of greatest players in the world.

“He can play everywhere – and he is so passionate,” Guardiola told reporters, as reported by Squawka.

“He will be one of the best players in Bayern’s history.”

Madrid could do with a player of the Austrian’s quality to provide an option at left-back and would be an ideal long-term replacement for Marcelo.

Furthermore, he could also also start in defensive midfield alongside star midfielder duo Luca Modric and Toni Kroos which would make Real more formidable in the middle of the park.