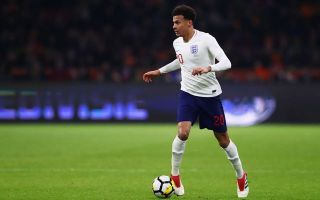 Dele Alli has cast doubt over his long-term future at Tottenham by refusing to rule out a move away from north London, according to Goal.

As per Goal, the England star has been linked with a host of European giants Real Madrid, Barcelona and Manchester Utd since his move from MK Dons to White Hart Lane three years ago.

Alli is preparing to take on Costa Rica in England’s last international friendly before the World Cup 2018 in Russia, but, whilst acknowledging his happiness with Tottenham, he does not know what’s in store in the future.

“I’d never say never to anything,” he told ES Magazine. “You never know what is going to happen in football.

“I have still got a few years left on my contract. We have got a young team, a young manager, a new stadium, so it is a great place to be at the minute.

“All the players can see the way the club is heading. But you can’t look into the future too much as it takes the pleasure out of now.”

Don Balon reported that Barca are willing to offer more than €120M in order to bring Alli to the Camp Nou, and that Real Madrid would be willing to include former forward Gareth Bale in any deal for the midfielder.

Since emerging onto the scene for MK Dons and Spurs, Alli has managed to stake a claim for being one of the brightest young talents in European football with his performances.

In 106 Premier League appearances, the Englishman has managed to clock up a total of 37 goals and 26 assists.

This is a brilliant record for a player of his age and it’s no wonder why Europe’s elite clubs are after his signature.

His form was inconsistent last term as he managed just half the amount of Premier League goals (9) compared to the season before (18) – nevertheless his career continues to grow in an upward trajectory.