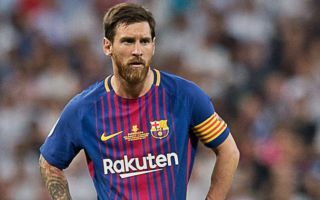 Lionel Messi has backed Barcelona to make a move for French star Antoine Griezmann this summer transfer window, according to the Metro.

Griezmann is undoubtedly Atletico Madrid’s talisman and scored 29 times this season whilst winning his first title, after the La Liga club were victorious in the Europa League.

He also expected to play a key role for France at the World Cup starting next week and has been continually linked with a move to Barcelona in a €100 million deal, should the Catalan club activate his release clause, as per the Metro.

And Barcelona superstar Messi believes he and the Frenchman can develop a great partnership together and heralded his abilities.

“He’s a great player and we would understand each other,” Messi told Mundo Deportivo, as re-reported by the Metro.

“He’s going through an exceptional moment in his career.

“It’s not yet one hundred percent, but the more quality we have, the better.

“We want to be the best team in the world, and for that we have to look at the best.”

There has been growing speculation that the Atletico star could even be persuaded to stay at the Wanda Metropolitano and judging by his reaction after his man of the match performance in the Europa League final, it’s clear he has a great affiliation with the club and Diego Simeone.

“It is not the moment to talk about my future, I must enjoy having won a trophy, and celebrate it with the fans. The truth is this was a dream for me, to win a trophy with Atletico, with [Diego Simeone] and my friends and teammates,” he is quoted as saying by ESPN.

“Your feeling for a club gets stronger every game, every year. I’ve been here four years, and I have enjoyed today with the fans, the people of the club, my relationship with them is strong, which is why I give everything on the pitch.”

The prospect of Griezmann lining up alongside Suarez and Messi is a tantalising prospect for all Barcelona fans.

The Frenchman would be an ideal replacement for Neymar after he departed the Catalans last summer and could replace the Brazilian’s ability to score crucial goals and provide assists also.