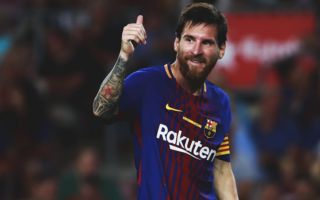 Lionel Messi has given Barcelona the go-ahead to seal a move away from the club for Brazilian midfielder Rafinha, with the club willing to let the player leave for €40M.

Don Balon are stating that the Argentine superstar is more than happy to see the 25-year-old leave the club, and that West Ham are very keen on the player.

The news outlet are also stating that the Spanish giants are willing to part ways with the midfielder for a total of €40M, and that West Ham are willing to fork out that total in order to bring the player to the Premier League.

Despite Rafinha impressing fans during his time with Barcelona, the Brazil star has failed to make a significant impact at the Camp Nou.

The playmaker has only managed to make a lowly total of 79 appearances for Ernesto Valverde’s side since making his first team debut for the club in the 2011/12 season.

If Barcelona are willing to let the player go and listen to Messi, it’ll be interesting to see if West Ham end up swooping in for the Brazilian and taking him off the Blaugrana’s hands.