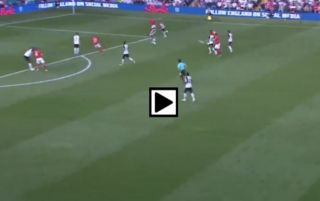 Marcus Rashford scored an absolute screamer for England this evening to give the Three Lions the lead against Costa Rica at Elland Road.

The Man United forward, who wasn’t in his best form for the Red Devils this season, scored an absolute peach of a goal to put Gareth Southgate’s side 1-0 up against the Central American minnows.

This game is the last game for the Three Lions before the start of the 2018 World Cup next week, and Rashford has done his best to make sure that they go into the tournament in the best possible form.

If Rashford can keep up this form during the group stages, we may very well see the forward claiming a place in Southgate’s starting line-up for the knockout stages of the World Cup.

Here’s a clip of Rashford’s stunning strike against Costa Rica today. What. A. Finish.