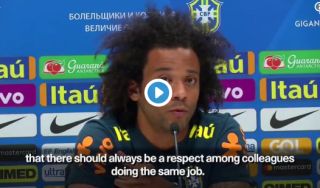 Real Madrid left-back Marcelo has appeared to take a dig at Liverpool star and Brazil team-mate Roberto Firmino over his comments regarding Sergio Ramos.

Marcelo and Firmino will be on international duty with Brazil at this summer’s World Cup but it seems there are early signs of tension.

This game was not without controversy as Ramos hit out at the behaviour of Liverpool’s players afterwards, saying to AS: ‘I did not want to talk, because everything is magnified … After the goalkeeper says he was shocked by a collision with me, it’s just that Firmino says he had a cold because he dropped a drop of sweat from me.’

This war of words continued as Firmino responded by saying, as quoted by Sky Sports: ‘I think he has a view because he was the champion but I thought he was an idiot for what he said but that’s okay.’

In the above video, Marcelo told a press conference that he felt Ramos was clearly joking and that ‘there should always be a respect among colleagues doing the same job’.

This seems to point the finger at Firmino over his response to Ramos, as this saga shows no signs of dying down.