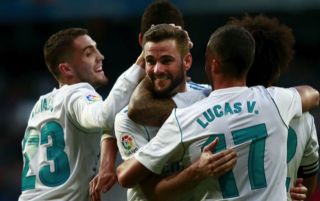 Manchester City manager Pep Guardiola is reportedly keen for his side to seal the transfer of Real Madrid midfielder Mateo Kovacic.

Although the Croatia international has formed a part of three Champions League-winning sides at Madrid, he has not often been a regular starter for the side in his time in Spain.

This has led to some speculation over his future in recent times, with the latest from Don Balon being that City are interested in securing his services this summer.

This follows another report from Don Balon stating that Manchester United manager Jose Mourinho was also keen on a deal for Kovacic, as both Manchester clubs look for new additions in midfield this summer.

CalcioNapoli24 have also linked Jorginho as a target for City and suggest a deal could be close, while United have already agreed a deal to sign Fred from Shakhtar Donetsk, as reported on their official site.

Kovacic is another similarly talented player, and may be one more likely to be available for a knock-down price due to his lack of playing time at the Bernabeu.