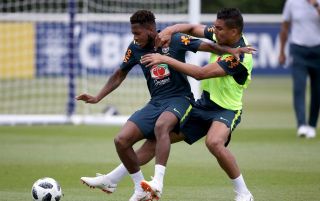 Manchester United have been dealt an injury blow as Fred had to sit out training after a heavy challenge as Brazil prepare for the start of the World Cup.

The 25-year-old has just agreed a deal to move to Old Trafford, as confirmed via the club’s official site, but it could be that he’ll be out of action for his country if this injury proves serious.

The full extent of the knock is not yet known, but the Manchester Evening News report that Fred had to stop training early and sit watching with an ice pack on his ankle following a challenge from Real Madrid midfielder Casemiro.

United will hope it’s not too serious and won’t affect their plans for Fred at the start of next season, with Jose Mourinho in desperate need of a decent list of fit and available midfield players.

The Red Devils are already short in that area following the retirement of Michael Carrick, while Marouane Fellaini is heading towards the end of his contract with the club.

Fans will also have been excited to see Fred in action this summer as for many it would represent their first real chance to see the former Shakhtar Donetsk man play.