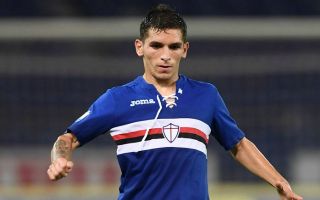 Arsenal are reportedly among the clubs trying to negotiate a transfer for Sampdoria midfielder Lucas Torreira this summer.

The Uruguay international has impressed in Serie A and looks precisely the kind of signing Arsenal need ahead of next season due to their shortage of quality in that defensive midfield area.

Torreira looks like a potential upgrade on the likes of Granit Xhaka and Mohamed Elneny, both of whom have struggled to establish themselves in the Premier League.

According to Gianluca Di Marzio, Arsenal are one of the teams in negotiations over Torreira, who has a €25million release clause and whose agent wants a week to come to a decision over his future.

Some Gunners fans will no doubt want to see them linked with some bigger names, and it’s stories like Sergej Milinkovic-Savic being a target (as per Radio Sei, translated by the Sun) that would really get fans off their seats.

Still, with Sven Mislintat as head of recruitment at the Emirates Stadium now, there also seems some hope that the club’s scouting has got a little more sophisticated, with the German showing during his time at Borussia Dortmund that he can identify top young talent on the cheap.