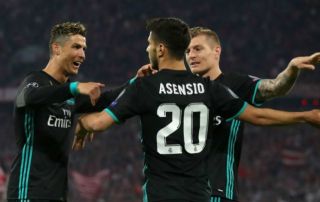 Cristiano Ronaldo leaving Real Madrid could reportedly cause a ‘chain reaction’ in the squad and cause other big names to look to leave the club.

This is the claim of Spanish outlet Don Balon, who list talented young Spaniard Marco Asensio as one of the names who could then look to quit the Bernabeu.

Asensio is one of the most highly regarded up-and-coming stars in world football at the moment and his potential departure would surely have a number of Europe’s top clubs on alert.

In recent times, there has been speculation that the 22-year-old could make his way to the Premier League with either Manchester United or Liverpool.

Diario Gol have mentioned interest from Jurgen Klopp’s side as part of a potential Mohamed Salah swap deal, while another recent report from Don Balon linked United with a potential offer of €100m for the Spain international.

The latest from Don Balon is that Ronaldo does seem to be heading for the exit, and this could be very good news indeed for sides interested in Asensio.

Given the Portugal forward’s world class displays for the club down the years, it would be little surprise if players felt like jumping ship as such an important figure could leave the club and have potentially dire consequences.