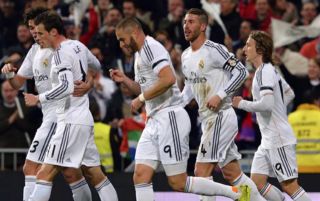 Real Madrid have set an asking price of €70m on the head of France star Karim Benzema, with Napoli reportedly interested in taking the player off the hands of the Spanish giants.

Don Balon are reporting that the Serie A runners up are keen to sign the Frenchman, and that the club are after €70M if they are to let him leave the club.

Don Balon have also reported in the past that Benzema is after a move away from Los Blancos, so if Napoli can cough up the money needed, we may see him securing a move to the Italian giants in the not too distant future.

Despite Benzema being fantastic overall since his move from Lyon in the summer of 2009, the Frenchman has come under some heavy criticism for his performances these past few campaigns.

In the past two season, the 30-year-old has only managed to clock up a total of 16 league goals in 61 appearances, a very poor return for a player of his ability.

If Benzema does end up leaving the Santiago Bernabeu, it’ll definitely be worth keeping an eye on who the club go for as a replacement for the ever-reliable forward.