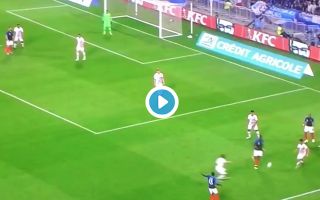 Paul Pogba produced a mesmerising skill last night for France which momentarily silenced some of his doubters.

Manchester United midfielder Paul Pogba produced a superb piece of skill for France during a friendly vs USA ahead of the World Cup.

France were held to a disappointing 1-1 draw with USA. Given that France’s opponents have not even managed to qualify for this summer’s World Cup in Russia it was far from perfect preparation for the French national side.

Kylian Mbappe-Lottin scored France’s only goal in the second-half and managed to savage a draw after Julian Green had given USA the lead on the 44th minute.

Manchester United star Paul Pogba played in a midfield three for the French side alongside Blaize Matuidi and N’golo Kante, which is likely to be France’s preferred choice in midfield for the World Cup this summer.

It has been a tough season for Pogba who was notably dropped for a number of fixtures this season under Jose Mourinho at Manchester United, such as Champions League fixtures with Seville. Pogba was also part of a United side that was unable to win a single piece of silverware this season.

The Frenchman however produced a sensational piece of skill last night, which can be seen below. The skill is likely to momentarily silence his doubters but nothing short of big performances will satisfy his critics at this summer’s World Cup.

Paul Pogba’s sure has the skills. Would be a world beater if he were be consistently up for it. #mufcpic.twitter.com/MIgzRHTkkl