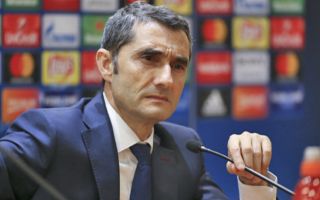 Barcelona are reportedly prepared to offer €40M to Ajax for midfielder Frenkie De Jong, a player who is also a target for fierce rivals Real Madrid.

Don Balon are stating that both of the Spanish giants are interested in the Ajax youngster, and that the Blaugrana are very keen to beat Los Blancos to the signing of De Jong.

The news outlet are also stating that the prepared to make a €40M swoop for the player, and that they believe this offer will be enough for secure a deal for the Dutch youngster.

With club icon Andres Iniesta leaving the club this summer, the Blaugrana will be wary about the reinforcements they need in midfield to fill the hole that’s going to be left by the Spaniard, something that De Jong will certainly help contribute towards.

The Dutch youngster has already managed to establish himself in the first team at Ajax, with the 21-year-old managing to make a total of 26 appearances in all competitions last season, scoring one and assisting nine in the process.

If Barca do make their move for De Jong, it’ll be interesting to see if their offer is enough to tempt Ajax into letting go one of their most promising youngsters.

Only three established senior players are safe at Barcelona this summer as clear out planned May 19 2021, 13:44
FC Barcelona

Opinion: The factors that will decide El Clasico between Real Madrid and Barcelona Apr 9 2021, 8:21
FC Barcelona

Barcelona could be forced to cheat if they don’t want to be without two influential players for El Clasico Mar 20 2021, 15:12
FC Barcelona

Barcelona are taking a huge risk with Lionel Messi and Frenkie de Jong ahead of El Clasico Mar 6 2021, 15:43
FC Barcelona