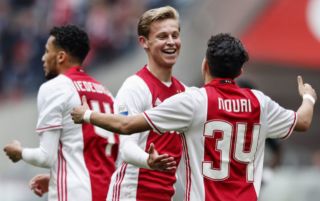 With their midfield stars all around the 30 mark, Barcelona would arguably be well advised to start planning a long-term strategy in that department.

Ivan Rakitic turned 30 earlier this year, while both Sergio Busquets and Paulinho will reach the same landmark this summer.

While it’s not to suggest that that trio haven’t got plenty left in the tank to offer, it would make sense to get ahead of the issue if necessary and bring in a long-term solution to fill the void that will eventually open up in the Barcelona midfield.

With that in mind, Mundo Deportivo report that the Catalan giants ‘made contact’ with Ajax over the potential signing of young midfielder Frenkie de Jong on Sunday, while it’s added that they want to wrap up a deal ‘as soon as possible’.

The 21-year-old impressed for the Dutch giants this past season, providing nine assists in 26 appearances. Those came despite being deployed in a defensive position, while also being sidelined since the start of March with an injury.

Boasting technical quality, defensive class, vision and an impressive passion range, De Jong arguably fits the mould at Barcelona and would be able to adapt to the style of play at the Nou Camp.

In turn, it’s no real surprise that he’s being targeted by Barcelona, but while the report suggests that contact has been made, there is no suggestion an agreement has been reached between the parties concerned and so it remains to be seen if a move materialises.

As noted on the club’s official site on Monday, they will receive €17m through the sale of Gerard Deulofeu to Watford, and so perhaps those funds will go towards their output and signings this summer.

Only three established senior players are safe at Barcelona this summer as clear out planned May 19 2021, 13:44
FC Barcelona

Opinion: The factors that will decide El Clasico between Real Madrid and Barcelona Apr 9 2021, 8:21
FC Barcelona

Barcelona could be forced to cheat if they don’t want to be without two influential players for El Clasico Mar 20 2021, 15:12
FC Barcelona

Barcelona are taking a huge risk with Lionel Messi and Frenkie de Jong ahead of El Clasico Mar 6 2021, 15:43
FC Barcelona