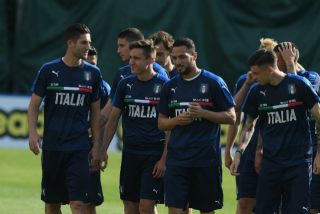 Fiorentina forward Federico Chiesa impressed last season, and it has reportedly led to interest from Serie A rivals in acquiring his services this summer.

The 20-year-old, son of former Italy international Enrico, bagged six goals and nine assists in 38 appearances in all competitions.

With an ability to play on either flank, he has displayed versatility, creativity and an eye for goal to ensure that he has emerged as a top talent in Italy, while he also made his breakthrough with the senior Azzurri squad.

Now, it’s claimed by Calciomercato that Chiesa could be sold by Fiorentina in order to finance their own summer transfer market, with Inter and Juventus specifically mentioned in the report as interested parties.

Further, it’s even suggested that the Turin giants are set to try and prise the talented youngster away from Florence with a €50m plus two-player swap deal, and that in turn has put them in a strong position to win the transfer scrap with their bitter rivals.

Having secured a seventh consecutive Serie A title last season, Juventus will be eager to sustain their domestic dominance but also strengthening the group to give themselves another strong chance of competing in the Champions League.

Chiesa would arguably help them with the former in the more immediate future, but Massimiliano Allegri will undoubtedly have to oversee plenty more development in his overall game to see him flourish at the very highest level and that will come with experience, maturity and playing time if he arrives.

As for Inter, after securing a return to Europe’s top table last year, they’ll be desperate to continue to move in the right direction and begin to compete domestically with Juve again both on and off the pitch.