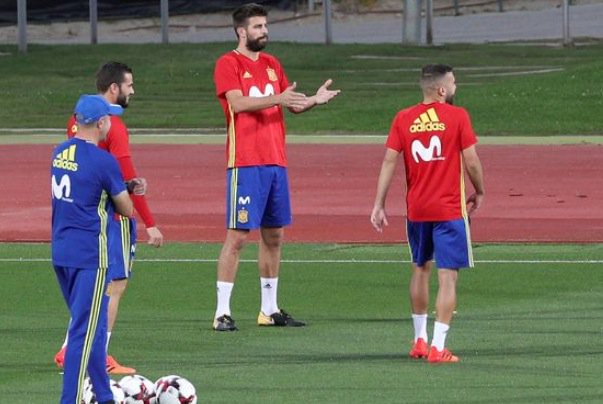 Spain will be hoping to make a positive impression at the World Cup this summer, but they’ll be sweating on the fitness of a fundamental figure it seems.

Julen Lopetegui’s side get their tournament underway with an Iberian derby against Portugal on Friday night, before facing Iran and Morocco in Group B next week.

In turn, they’ll want to make a positive start to the World Cup against Cristiano Ronaldo and Co. to put themselves not only in a strong position to qualify for the next round, but also to finish top of their group.

However, as noted by Marca, they’ve been dealt an injury concern as defender Gerard Pique left training early on Sunday due to a knee complaint as he moved away from the main group and continued a personal exercise push along with David Silva.

It’s the last thing that Lopetegui needs on the eve of the World Cup, as he’ll be desperate to have a full strength squad at his disposal throughout the tournament to give them plenty of options and ensure that they enjoy a deep run.

Nevertheless, it now remains to be seen if Pique is a doubt for Friday’s opener, or if it was merely a precautionary move to avoid seeing him suffer any further damage.

Spain do have plenty of quality in that department regardless, but ideally they’ll want to rely on their two experienced and world-class pillars at the back in Pique and Sergio Ramos.

‘Don’t mess with us’ – Gerard Pique fired insult at Luis Suarez after ex-teammate tried to sneak penalty against Barcelona for Atletico May 9 2021, 14:22
Liverpool FC