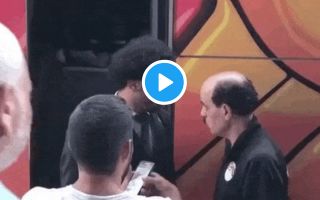 Egypt will be desperately hoping to have Mohamed Salah fit for the World Cup, but this fan missed out on a selfie after inadvertently grabbing his hero’s injured shoulder.

The Liverpool winger sustained the setback in the Champions League final in Kiev against Real Madrid last month, after he got tangled up with Sergio Ramos and fell awkwardly with the weight on his shoulder.

In turn, he has been racing to be passed fit to feature in Russia, and while he made the cut for the final squad travelling for the World Cup, it remains to be seen whether or not the knock limits his participation.

As seen in the tweet below from freelance injury analyst Ben Dinnery, Salah has provided a positive update on his condition, suggesting that he could even be fit to face Uruguay in his nation’s opening game on Friday.

“I’m excited,” he is quoted as saying. “I am preparing in a very good way for the Uruguay match and things are going well. Let’s see what will happen in the coming days. My morale is very good and everything is okay.”

However, this fan wouldn’t have helped as after going in for a selfie with the Egyptian forward, he accidentally grabbed his shoulder while putting his arm around him.

While Salah looked as though he was still keen on giving the fan the picture despite grabbing his shoulder and looking in discomfort, the security around him ensured that the supporter missed out on his big moment.

Perhaps more worryingly for all concerned though, is the fact that Salah looked as though the shoulder is still troubling him with minor pressure being applied. He can expect a more strenuous knock or two in the coming weeks and so this doesn’t bode well…

Egypt fan goes to take a selfie with Mohamed Salah, grabs his injured shoulder and… gets no selfie. ¯\_(?)_/¯ pic.twitter.com/pepwMgqleg

Salah confident despite sitting out of #Egypt training session on Sunday: “I’m excited. I am preparing in a very good way for the Uruguay match and things are going well. Let’s see what will happen in the coming days. My morale is very god and everything is okay.” #LFC