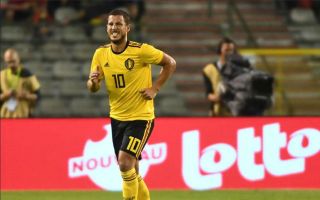 Romelu Lukaku scored twice as Belgium cruised to a 4-1 victory against Costa Rica in their final World Cup warm-up match – however, Hazard limped off in the 70th minute.

However, fans would have been sweating on the fitness of the Chelsea star who will be Belgium’s talisman, alongside Kevin De Bruyne.

When pressed about the severity of Hazard’s injury after the win, Belgium boss Roberto Martinez played down any fears of his injury and said, as per the Metro:

“Eden is okay, he had a little trouble, but it’s nothing to worry about.

“I really enjoyed his performance. He was sharp and strong, he was majestic.

Belgium will look to Hazard to inspire them at this summer’s football gala as he has been one of the world’s best players since his move from French side Lille in the summer of 2012.

The Belgian star has managed to get a total of 89 goals and 75 assists in 300 games for the west London side, and won two Premier League titles in the last four seasons.