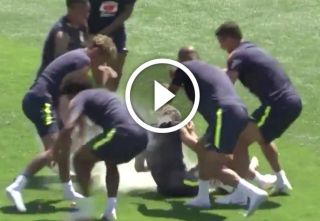 Brazil are busy preparing for their World Cup opener at the weekend, but they certainly look like they’re enjoying themselves in training!

Tite’s men get their tournament underway on Sunday when they face Switzerland at the Rostov Arena in their Group E opener.

Having brushed aside Austria in their last friendly outing, they look in good shape and they can seemingly afford to prank each other in training to show just how relaxed the mood within the camp is.

Philippe Coutinho celebrated his 26th birthday on Tuesday, and it didn’t pass without getting egged with a heap of flour and water also being thrown on him by his teammates, much to the delight of the onlooking crowd, as seen in the video below.

The Barcelona playmaker looked annoyed last week after Neymar began flicking his ear after he lost a game in training, but Real Madrid left-back Marcelo was on hand to gain revenge for his compatriot as he returned the favour to Neymar shortly after the initial prank.

Given their history in the World Cup, Brazil will be considered one of the favourites for the tournament in Russia. After their disastrous defeat to Germany on home soil four years ago in the semi-finals though, they’ll also be looking for redemption and so things might get a little more serious closer to kick-off.

Philippe Coutinho gets egged on his birthday, before Marcelo helps him get his revenge on Neymar ? pic.twitter.com/ZG9riVQSnR

Philippe Coutinho does not like his ears being flicked ? pic.twitter.com/qq2JpgpoTW