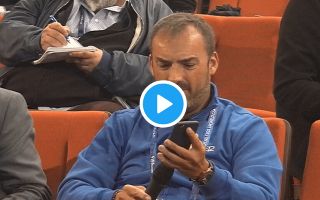 Atletico Madrid and France forward Antoine Griezmann addressed the media on Tuesday, but refused to clarify his club future despite admitting he’s made a decision.

As noted by Sky Sports, the 27-year-old remained coy on his future amid ongoing speculation linking him with a move to Barcelona this summer, but one cheeky Spanish journalist decided to try and prise something out of him.

After the French press officer had stated that only questions in French would be allowed to avoid the Spanish media from asking Griezmann about his future, this journalist used Google translate on an app on his phone to ask the question.

Naturally, the press officer wasn’t impressed and seemingly asked for the journalist to not be allowed the microphone, although Griezmann seemed to find the antics quite funny.

Unfortunately, he wasn’t able to get anything other than a good laugh around the press room. To be fair, it is hilarious even if the French press officer won’t agree…