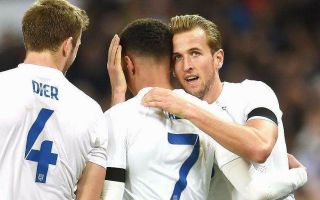 England have flown out to their Russian base ahead of this week’s World Cup 2018 and captain Harry Kane has urged his side to be more bullish in their approach to the tournament, according to Sky Sports.

The Three Lions have prepared well for the tournament and won their last two international friendlies against Nigeria and Costa Rica.

Gareth Southgate’s young squad will take on Group G opponents Tunisia next Monday at 7pm and Kane has called for the team to play an expansive brand of football and not be overawed by the big stage.

As per Sky Sports the Tottenham striker outlined his preferred style England should take into the tournament and said:

“The aim is to be aggressive and brave in possession. We want to take this tournament head on.

“There will be tough moments, and ups and downs. Sometimes going into a big tournament is about not losing and being passive but, for us, it’s about playing attacking football.

“We are aiming to win the first game, then to target the second, and take that attitude to the World Cup.”

Kane has scored 13 goals but has not scored at a major international tournament, but has cemented himself as one of Europe’s finest goalscorers and found the net 41 goals in 48 appearances last season as Spurs got back into the Champions League.

However, the marksman is keen to improve on his international tournament record after failing to score in Euro 2016.

“Personally, that (scoring) record is something I want to change, and hopefully will this summer,” added Kane.