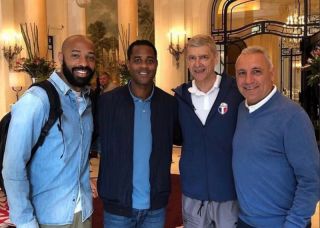 Posing for a photo with fellow Arsenal legend Thierry Henry, as well as Patrick Kluivert and Hristo Stoichkov, Wenger could be seen smiling despite the obvious pain of no longer being in charge at the Emirates Stadium.

Wenger spent 22 years in charge at Arsenal but his last few years proved challenging as he no longer looked the man to lead them to major honours.

The Frenchman has since been replaced by Unai Emery and it remains to be seen what he’ll do next as he’s yet to land himself another management job.

Still, at least with his Arsenal trousers he can still pretend none of the last month ever happened. Poor guy.