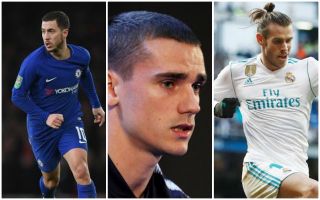 The France international has confirmed he wants to stay at Atletico Madrid after plenty of speculation over his future over the last year or more.

Don Balon recently suggested United could still be in for Griezmann, but he went to great lengths tonight to explain his decision to stay at Atletico.

This is great news for Rojiblancos fans, but United may now have to think about other options to strengthen in attack.

Jose Mourinho surely knows he needs more options in that department, with Alexis Sanchez struggling to impress and Anthony Martial’s future in doubt as he’s linked with Chelsea by the Telegraph.

Don Balon have also stated United have stepped up talks over signing Bale from Real Madrid, and he is a popular choice as an alternative among fans on Twitter tonight.

In fact, many seem pretty confident a deal will happen for the Wales international, so they’ll hope these tweets don’t come back to haunt them…

Griezmann staying at Atletico? We move. That number 10 shirt is waiting for you at Old Trafford @GarethBale11. pic.twitter.com/pIush1WYzS

Ok Bale it is then.Griezmann seems a bit of a dick #MUFC

Griezmann stays, Bale arrives. Bale’s transfer to United was clearly written in the stars, this man will arrive and take the club back to the top

Just remembered that Bale to United is happening! 200 million down the drain and Gareth Bale gets hurt again #TonyMartialRemix #Griezmann #MUFC

The good thing about the Griezmann drama is that @ManUtd main man should be Gareth Bale.

Griezmann to Mufc is done