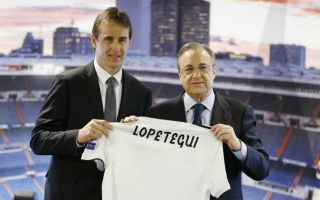 Real Madrid could try to beat Manchester United to the transfer of Paris Saint-Germain midfielder Marco Verratti this summer.

According to Don Balon, Los Blancos president Florentino Perez is eager to land Verratti in midfield as a key figure in rebuilding the side under new manager Julen Lopetegui, who was unveiled on Thursday.

The Italy international is undoubtedly one of the finest players in the world in his position and makes sense for Real as a long-term replacement for the ageing Luka Modric in that creative midfield role.

United are also in the market for new signings in that part of the pitch, with their official site reporting that they’ve already agreed a deal to sign Fred from Shakhtar Donetsk.

This comes as Michael Carrick retires from playing and Marouane Fellaini nearing the end of his contract, with one more signing in midfield making sense for the club.

Verratti was reported by the Sun as being a £75million target for United, due to Lazio’s Sergej Milinkovic-Savic being too expensive.

The 25-year-old certainly seems a decent player to land for new manager Lopetegui as he looks to move on from the disappointment of being sacked as Spain boss just one day before the start of the World Cup.

Another Don Balon report, however, has stated that Lopetegui himself is eager to land Chelsea’s N’Golo Kante as his ideal signing in midfield.