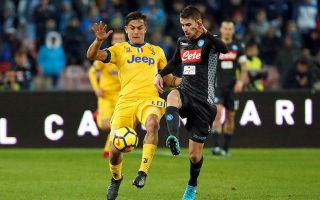 After coasting to the Premier League title last season and winning a domestic double with the League Cup, Man City boss Pep Guardiola may not need to do too much to his squad this summer.

City secured the league title with a staggering 19-point gap between themselves and nearest rivals Man Utd, although they did fall short in the FA Cup and Champions League.

In turn, specific reinforcements may be needed, and adding quality and depth in the defensive midfield role is arguably a priority after Yaya Toure’s exit and veteran Fernandinho’s heavy workload last season.

The Brazilian international made 48 appearances in all competitions last season as he prepares to turn 34 next year, and so given The Sun claim that Man City have reached an agreement on personal terms with Napoli midfielder Jorginho, that could be a very sensible signing and quality addition if a deal is done.

Nevertheless, a significant issue remains as it’s claimed that while City are playing hard ball and refusing to offer in excess of £44m for the Italian international, Napoli are demanding more and so it remains to be seen if a deal is struck this summer to complete a transfer.

As noted above, Jorginho would be a crucial addition to the Man City squad, but also with his technical quality, defensive coverage and passing range in mind, he would arguably fit in perfectly to Guardiola’s system and style of play.

However, it will require negotiation and compromise on the fee it seems, and so time will tell if the Premier League champions are able to prise Jorginho away from Naples this summer.

Napoli fell agonisingly short of the Serie A title again last season, and with Carlo Ancelotti coming in to replace Maurizio Sarri, as per Sky Sports, he’ll likely want to keep the core of the squad together but also make his own changes to stamp his mark on the group.

Whether he’ll have Jorginho at his disposal remains to be seen.