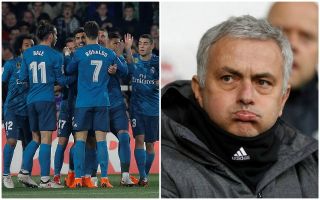 Man Utd have acted swiftly to bolster their squad already this summer, and a key report has delivered a crucial update on the future of a marquee target.

As noted by the club’s official site, they’ve reached an agreement for Brazilian midfielder Fred, while they’ve splashed out £19m on full-back Diogo Dalot, as reported by BBC Sport.

In turn, Jose Mourinho is evidently eager to address weaknesses in the squad as quickly as possible, giving any new recruits the maximum amount of time possible to settle and adapt over the summer, or after their World Cup is over.

However, the Red Devils have reportedly suffered a blow too as ESPN note that Gareth Bale has opted to stay at Real Madrid as he looks to make an impression on new coach Julen Lopetegui in what could be a fresh start for the Welshman after the departure of Zinedine Zidane.

Particularly in big European games last season, he found himself left on the bench regularly by the French tactician, and he hinted in his post-match interview after the Champions League final that he wanted to feature more prominently moving forward, as seen in the video below.

“I need to be playing week-in-week-out…that hasn’t happened this season.”

It remains to be seen if he is promised that by Lopetegui, who was unveiled to the media on Thursday, but this sounds as though Man Utd may well have to focus their attention elsewhere if he is committed to the Spanish giants.

As noted by The Mirror, United have been heavily linked with a move for the former Tottenham ace, who is said to be valued at around £100m.

Based on the above report though, it looks increasingly unlikely that a move to Old Trafford will materialise.