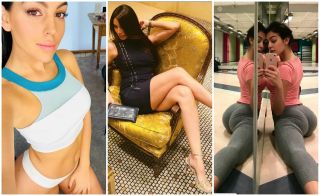 They’ve won it all together on the pitch at Real Madrid, but now Cristiano Ronaldo and Sergio Ramos face off at the World Cup when Portugal and Spain meet.

The two nations square off in their Group B opener at the Fisht Olympic Stadium on Friday night, with Spain still reeling from the fallout after Julen Lopetegui’s sacking on the eve of the tournament.

Fernando Hierro will now have to add some stability and calm to the camp, but the battle won’t just be limited to on the pitch as the WAGS will undoubtedly be out in force.

Taking the two main potential protagonists in Ronaldo and Ramos, the pair will have their better halves cheering them on no doubt and life can’t be too bad with these ladies in your corner.

Georgina Rodriguez and Pilar Rubio have made plenty of headlines with their own careers and social media activity, and there will undoubtedly be cameramen keeping a close look out for them on Friday.

Based on Rodriguez’s Instagram activity though, it would appear as though she was in Milan on Thursday, and so it remains to be seen if Ronaldo will have his missus and entire family out in Russia with him during the entire tournament.