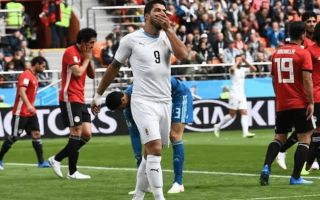 From his horror miss in the first half to his general sluggishness in front of goal, Uruguay forward Luis Suarez didn’t enjoy a positive World Cup opener.

Fortunately for the Barcelona superstar, Jose Gimenez was on hand to score a late winner for Oscar Tabarez’s side as they picked up all three points in their Group A opener against Egypt.

Whether or not they deserved the win is up for debate as they didn’t particularly impress in the first half in particular, but perhaps on the balance of play, they did enough to warrant their victory.

However, that won’t excuse Suarez for his poor performance, and much more will be expected of the veteran moving forward in the tournament, especially if Uruguay get beyond the group stage.

As seen in the tweets below, his display didn’t impress those watching, as he spurned a few great chances to get himself on the scoresheet while constantly looking like a frustrated figure off the ball when struggling to get into the game.

To add further heated discussion over his evening, he engaged in a clash with Ahmed Hegazi late on which earned the Egypt defender a yellow card, but there’s no confusion over who was heavily criticised after the game.

With minimal contact and a huge helping of play-acting, perhaps Suarez will feel as though it was job done…

Suarez is completely and officially finished ?

Mo Salah has been better than Luis Suarez in this game.

LMFAO diving, playacting, moaning and whining. Suarez will never change. Glad we have Firmino in his place.

Luis Suarez is a class A idiot. Rolling around like an absolute idiot.Shocking player honestly. Wonder how his kids show their face at school after all this.

That’s probably the worst individual performance I’ve ever seen from a striker at the World Cup. Suarez was horrendous.

Suarez is a disgrace with his dives he needs to be stopped ?

Luis Suarez is literally the worst. What a clown. #EGYURU #WorldCupRussia2018

Suarez is a despicable bastard

The worst part about this performance is that Suarez is becoming completely unsellable.

RT if you’ve made a bigger contribution to this game than Luis Suarez.

This is one of the worst performances I’ve seen from Suarez. He’s hardly done anything right.