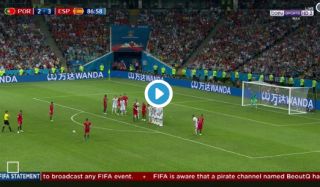 Portugal star Cristiano Ronaldo has worked his magic yet again with a late free-kick to make it 3-3 vs Spain.

In what has been an absolute thriller in the World Cup this evening, the Real Madrid forward has hit a sublime hat-trick to get off to a superb start in Russia.

Although Portugal were winners at Euro 2016 two years ago, it’s no secret Ronaldo has often struggled to look quite as good for his country as he has for his club.

But tonight the 33-year-old was unplayable as he scored a penalty, got a bit of luck for his second and then equalised with the perfect free-kick late on.

CRISTIANO RONALDO JUST SCORED THIS FREE KICK FOR HIS HAT-TRICK. THIS MAN IS INCREDIBLE. WOW! pic.twitter.com/91PQBfnNud