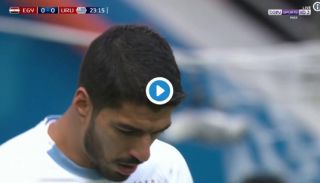 The former Liverpool man somehow scuffed his shot into the side netting when it looked easier to score – and in fact from some angles it really looked like he had.

Jonathan Pearce announced it as a goal on BBC’s coverage before then claiming it had been ruled out after seeing Suarez’s reaction.

It was only from replays that the commentators realised it had just gone into the side-netting, in what has to go down as a very bad miss from such a top player.

Watch a couple of angles of it below:

So so easy miss from Suarez. Glorious opportunity missed by Uruguay pic.twitter.com/Ll5ZSFJvuX