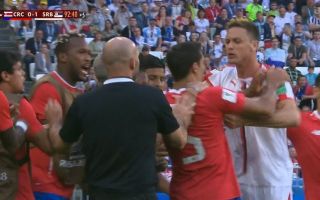 Serbia secured a hugely important 1-0 win over Costa Rica in their World Cup opener on Sunday, and Nemanja Matic was key in that victory.

The Man Utd ace was fundamental in marshalling the midfield and setting the tempo as Serbia kept things tight defensively which enabled Aleksandar Kolarov’s stunning free-kick to end up as the winning goal.

However, it wasn’t just his efforts on the pitch that earned Matic praise, as Man Utd fans were quick to react to his late scuffle with what appeared to be the entire Costa Rica bench.

As he looked to retrieve the ball late on in injury time, a member of the Costa Rican coaching staff held onto the ball a little too long for his liking, which sparked angry scenes as others quickly came across which threatened to see things boil over.

Fortunately, order was restored and despite VAR being used, there wasn’t anything serious enough to warrant action being taking by the officials.

Nevertheless, as he showed that he wasn’t about to stand down despite being heavily outnumbered when getting the ball, these Man Utd fans were full of praise for their midfield general…

Donald Trump plans on spending millions on building a wall across the American and Mexico border.

When he could simply pay Nemanja Matic to protect the border, nobody would get past that man.

Nemanja Matic taking on the Costa Rica bench. My defensive-midfielder.

Nemanja Matic there taking on the whole Costa Rican bench. Love it.

The entire nation of Costa Rica wouldn’t stance a chance against Matic. Go on, lad.

Go on Matic you fucking legend