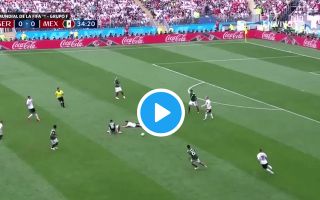 Mexico made a lively start to their clash with Germany on Sunday, and their sharp attacking play led to a fine breakthrough against the reigning champions.

The swift attacking play, particularly on the counter-attack, from the Mexicans, continued to cause Germany problems in the early stages of the game.

Seemingly unable to make adjustments, the Germans continued to look vulnerable at the back and finally in the 35th minute, Hirving Lozano was able to finish off a great move by producing a composed finish to find the back of the net past Manuel Neuer.

The PSV forward had a fine season last year, scoring 19 goals and providing 11 assists in 34 games. While also shining in the qualifying games, he was going to be the danger man for Mexico and he grabbed his first goal of the tournament with perhaps more to come from the exciting youngster.

Joachim Low was unable to find a way to deal with their pace on the counter-attack, with the World Cup champions having to produce a response after falling behind as the tradition of the holders struggling in the following tournament struck early in Russia.