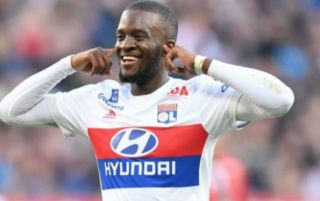 Chelsea are eyeing French midfielder Tanguy Ndombele as a replacement for N’Golo Kante, according to the Metro.

Kante has been linked with a return to France and there is growing conjecture that he could move to Paris Saint-Germain this summer – as per the  report from the Metro.

Lyon starlet Ndombele, 21, has seen his reputation grow as one of France’s next crop of brilliant midfielders and has already managed to establish a first team place with the French side this season.

He played a part in 50 games in all competitions for the Ligue 1 giants this season, and boasts some impressive numbers, scoring one and assisting eight in the process.

The midfielder is rated at £53m according to the report and could be a long-term replacement for Kante, 27, after the Chelsea man did not give a definitive statement that his future lies at Stamford Bridge.

When quizzed about the rumours to PSG after France’s victory against Australia in their World Cup opening game, the Chelsea star gave a coy response.

‘I am not concerned with all that,’ said Kante as reported by the Metro.

‘Today, I am at Chelsea, and today I am currently living and playing in the World Cup, that is what comes first.

‘I am not paying attention to what is being said on the club side of things at the moment.’

However, Chelsea could face competition from Tottenham who are said to be admirers of Ndombele and have enquired about the player, as reported by L’Equipe and translated and re-reported by HITC.