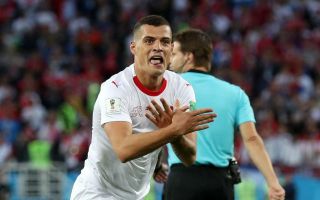 Granit Xhaka produced a wonderful goal during the World Cup encounter between Switzerland and Serbia which left Arsenal fans praising the Swiss star at the expense of Paul Pogba.

The Arsenal midfielder drew criticism from pundits for being profligate in possession, however, he went rifled in a trademark long-range effort to tie the game 1-1.

Xherdan Shaqiri’s influence grew in the second-half for the Swiss and his initial shot was blocked before the ball ran across the box and directly into the path of Xhaka who ran onto it and unleashed a rocket into the Serbian goal.

Newcastle striker Aleksandar Mitrovic continued his fine form from the Championship playing for Fulham and opened the scoring tie with a superb header.

Both sides will be desperate to qualify after Brazil won their tie against Costa Rica 2-0 to take their points tally to four points in Group E.

Xhaka has become on the third Switzerland player to score in two consecutive World Cups.

And that is why xhaka is better than pogba.

Xhaka scored a worldie. Pogba could never. Tonight we eat

Always knew that Xhaka is so much better than Pogba

I’m just gonna do Xhaka > Pogba and shut up.

Granit xhaka is better than paul pogba and here’s why

Xhaka rocket, but don’t mention him in the same breath as Pogba.