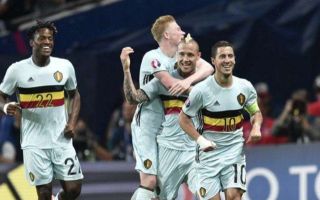 Fans took to Twitter this afternoon to slate Chelsea forward Michy Batshuayi for his poor cameo for Belgium in their 5-2 win against Tunisia.

The Blues ace, who came on as a sub during the second half, squandered a number of good chances during his time on the pitch for the Red Devils, with some fans not taking too kindly to the forward’s performance.

Roberto Martinez’s men managed to win the match convincingly by a scoreline of 5-2, one that will surely see them put them into the next round of the competition no matter the result of England vs Panama on Sunday.

Despite him bagging a goal himself, fans were absolutely stating Batshuayi’s cameo against the north African side this afternoon.

Here are a few select tweets from fans hammering the Belgian for his performance against Tunisia this afternoon, criticism that we think is slightly harsh considering the result was already wrapped up for the European side!

Batshuayi has missed 3 sitters in 5 minutes, never my striker.

Michy Batshuayi… Come on man! really? How much does he get paid?

Batshuayi back to being awful again.

Batshuayi trying everything to keep his price down so Dortmund can sign him. What a guy.

Hands up if you would have scored at least one of those chances of Batshuayi’s.

Michy Batshuayi could’ve been leading the race for the golden boot in a 25 minute cameo if he wasn’t finishing like Morata. #BELTUN