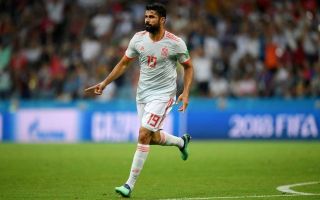 Spain face Morocco in Group B in the World Cup 2018 and will be looking to finish top of the group with victory tomorrow.

Spain are level on points with Portugal after a thrilling 3-3 draw against Cristiano Ronaldo’s team before they broke down a stubborn Iranian side by winning 1-0.

Diego Costa has been Spain’s star in the tournament thus far and has three goals to his name in the chase for the World Cup Golden Boot.

A draw for Fernando Hierro’s men will be enough to progress into the last-16, however, they will be eyeing a win over Morocco – who have already been eliminated from this year’s tournament.

As per Goal, Spain have no injury concerns as Dani Carvajal returned to the starting XI at right-back against Iran.

Morocco will be looking to key players Mehdi Benatia and Younes Belhanda to give something for their fans to cheer.

There best performance in a World Cup came in 1986 when they finished in the last-16 before being sent home by West Germany.

When is Spain vs Morocco and what time is kick-off?

The match will be held on Monday, June 25.

The game will be held at the Kaliningrad Stadium in Russia.

Spain vs Morocco will be shown live on BBC1 in the UK.

The game will be streamed live on the BBC iPlayer.