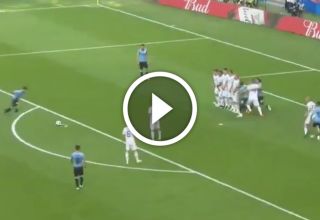 Luis Suarez has had a frustrating World Cup for the most part, but he took just 10 minutes to put Uruguay in front against Russia in their World Cup group stage clash.

The Barcelona forward did it in some style too as after Rodrigo Bentancur was brought down just on the edge of the box, Suarez stepped up and drove his low free-kick powerfully under the wall and into the back of the net.

SEE MORE: Ernesto Valverde desperate for Barcelona to get deals over the line for €74M duo immediately

Having bagged the winner against Saudi Arabia, Suarez will be hoping to do the same again against the hosts to secure top spot for Uruguay.

Both sides came into the game with maximum points after winning their opening two encounters, but they’ll be keen to wrap up the group stage in confident fashion as potentially either Spain or Portugal await in the last-16.

With Russia exceeding expectations so far, they’ll be desperate to give the home faithful another reason to cheer with an important victory against a top side to prove that they are certainly worthy of a place in the knockout stage of the tournament.

Someone in the Russian team have Suarez as 1st goal scorer?? ?? ffs look to right of wall ? pic.twitter.com/rWuZ89DkEe