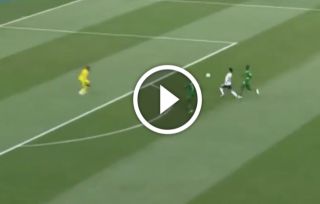 Mohamed Salah was forced to miss Egypt’s opening World Cup game, but he’s since made up for lost time with two goals in two games.

The Liverpool ace was still recovering from the shoulder injury that he sustained in the Champions League final last month, and therefore sat out the defeat to Uruguay.

Unfortunately for him and the Pharaohs, his return against Russia couldn’t spark them into life as they suffered another defeat, although he did net his first World Cup goal from the penalty spot.

However, he showed his class and why he has emerged as one of Europe’s biggest stars this past season with this goal to break the deadlock against Saudi Arabia, as he raced clear of the defenders before keeping his composure to lob his finish over the onrushing goalkeeper and into the back of the net.

It was a confident finish from the 26-year-old, and it comes as no surprise after he bagged 44 goals and 16 assists in 52 games for Liverpool last season.

It’s not enough to save Egypt and prolong their World Cup campaign as they were already eliminated before kick off, but it certainly will be a great way to sign out if they can secure a win.

GOAALLL! Salah races through and lobs the goalkeeper to put Egypt ahead against Saudi Arabia.#KSAEGY #WorldCup #EGY pic.twitter.com/g5dV3s1YY4